I was initially interested in the idea of attending XO’s fourth supper club when I saw photos of the dishes; clean shots looking down on large, circular sparse white plates with a little dollop of something in the corner. This looks intriguing I thought. When I looked into it further and read more about previous creations such as, ‘chocolate, seaweed, salted caramel and coconut’ and ‘brown butter crab tart with pomme purée and egg jam’, I was swayed to the idea even more. Once I found out that the unique experience was available for only £25, I was already on the phone booking a table.

I’ve never been to a supper club before, so this experience was new to me. Previous XO events have been housed at Mr Nobody and The Hedonist Project, along with stints at The Domino Club and Headrow House, serving their infamous cheeseburger spring rolls and hangover cones (which happen to be two of their most popular dishes). The September supper club took place every Thursday and Friday (with 7pm and 9pm sittings) throughout the month, at Oporto bar on Call Lane. On arrival, we were greeted with a warm welcome and shown to our table. Everyone one was very friendly and as soon as we sat down, our waiter for the night was already pouring us glasses of water and striking up a conversation. We opted out of the drinks flight (which consisted of three cocktails and two sakes) simply because it doubled the price and honestly, I hadn’t intended to spend too much money that night. Though at a second glance, none of the cocktails particularly stood out to me anyway. Instead we stuck with our beer choice of Beavertown’s Neck Oil Session IPA and Gamma Ray Pale Ale; hoppy and refreshing and in my opinion, a great accompaniment to washing down the food we were about to consume.

First up, was the much-talked about cheeseburger spring roll, served in a polystyrene disposable takeaway box. Appearance wise, it was certainly authentic and the incredible taste was very reminiscent of early mornings spent in McDonald’s, gorging on a cheeseburger and fries after a night out. It was hot, greasy and absolutely delicious.

‘The incredible taste was very reminiscent of early mornings spent in McDonald’s’.

Next, was the first of their three ‘secret’ courses, which were hidden from the menu: corn on the cob with sriracha mayo and in their words a ‘shit load’ of parmesan, which had perfectly settled on the sweetcorn like fluffy snow. I found myself scooping the cheese up from the sides of the plate, covering the corn even more and rolling it around in the sweet, creamy sriracha mayo before then drizzling lime juice over it. Things were starting to get messy but this dish was definitely a favourite of mine; it was so simple and the sweetness worked really well with the nutty, moreish taste of the parmesan.

From this point on, I was beginning to notice similarities between dishes; as each course was placed in front of us, pungent smells would instantly hit our noses and once we started eating with our hands, it become quite a sensory experience. With the aptly named ‘hangover cone’ as the final course, it suggested that the tasting menu to ensue would quite literally ‘get us drunk’ on an array of tastes, smells and flavours. With regards to this, some dishes were very full on, but a few were more delicate yet slightly fleeting. The scallop with xo sauce and pork floss was so small it was gone in an instant and almost forgettable. I would have liked to appreciate the flavours for a bit longer, however, they disappeared in my mouth as they did from the plate. Unfortunately, the angel delight butterscotch didn’t do anything for me; it brought back memories of primary school puddings but not in an exciting way. The complimentary glass of plum sake (which was sweet and almondy) slightly made up for this, though. 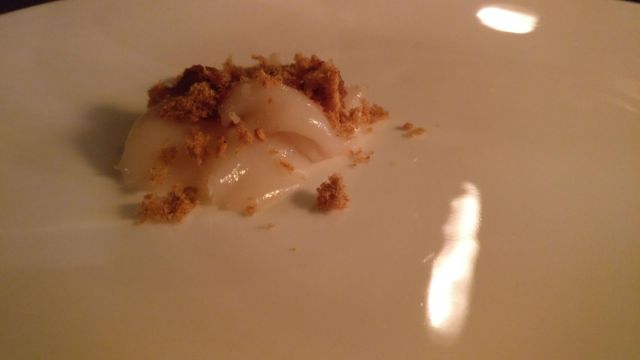 Another favourite was the three hour slow-cooked bo-ssam which had been put on high heat towards the end, to produce a crispy skin. Alongside this, we were presented with individual small bowls of baby gem lettuce, fermented pineapple kimchi, green onions and crispy shallot (not forgetting the hoisin sauce already on the plate) and instructed to shred the pork ourselves and load the lettuce leaves, taco style. (It’s also worth noting that at this point, we branched out to a yuzu and ugli fruit IPA from Oskar Blues Brewery which was very refreshing.) The pork was juicy and succulent and just melted in your mouth; in fact, the overall experience lulled you and I found myself closing my eyes with each bite. Crunching into the lettuce leaf released a refreshing, wateriness into your mouth which helped to balance out all the other elements. Everything just worked and I inhaled as many as I could before hoovering up the rest, once we were out of baby gem lettuce.

‘Everything just worked and I inhaled as many as I could before hoovering up the rest’.

On the subject of sharing dishes, the bo-ssam and the hangover cone were the only two courses which suited this. I enjoyed starting the night off with a whole cheeseburger spring roll to myself but I didn’t quite understand why the tiny portions of spicy rice cakes with gochujang and green onion, and the sweet and sticky intercostal with shio-kombu and koji, were intended to be divided? I am fully aware that if I ate all the rice cakes on my own, my mouth would have been on the fire for the next five hours, however, that still didn’t stop me from wanting to have my own plate of it, so I could enjoy my own portion of such intense flavours. 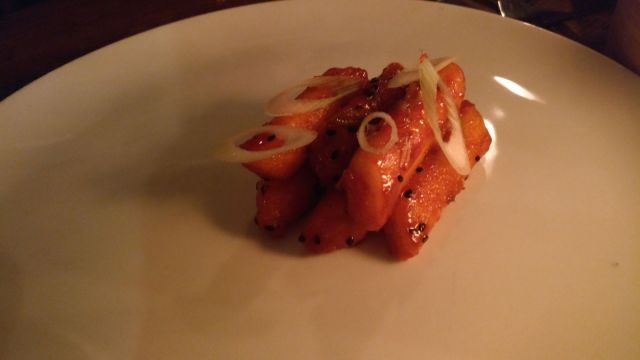 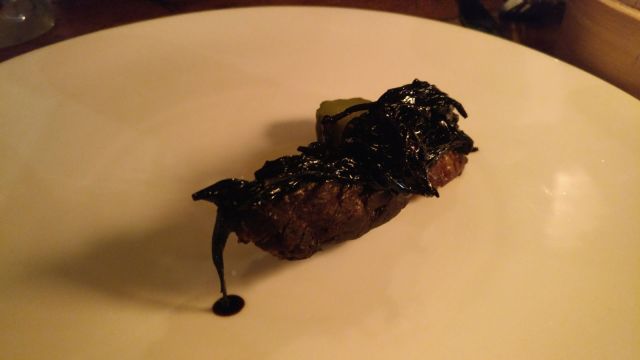 I am yet to confirm my thoughts on the hangover cone. It certainly brought the wow factor in terms of looks – and the prospect of eating crisps with bacon and cookie dough sounded quirky. I did enjoy the way the raspberry complimented the dulce de leche and cut through the saltyness of the pretzels, crisps and bacon, yet I questioned whether certain elements of the concoction were homemade or shop bought? I didn’t want it to feel like something I could put together myself and I also wasn’t convinced by what the wafer cone brought to the dish, other than to emphasize the image of a dropped ice cream.

Despite this, the night was really fun. The waiters were chilled out but knew exactly what they were doing and you really felt taken care of. The dimly lit setting, with the flickering candles and Sampha, Wu-Tang Clan and Tame Impala playing in the background, gave a homely rather than restaurant feel and as each course was served, we got chattier and chattier with our waiter to the point where once it was time to leave, it felt like we were leaving a dinner at a friend’s house rather than a meal out. XO Supper Club have recently announced that they will be holding two vegetarian nights this October and I would definitely recommend going. As for me, I’ll be back on their Instagram, looking out for the next set of dishes.